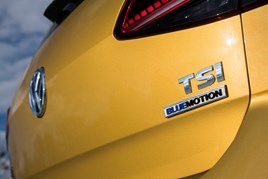 Volkswagen has added a new 1.5-litre TSI ACT engine to the Golf range, which promises fuel consumption of 58mpg.

The petrol engine will be cheaper than an equivalent diesel and has CO2 emissions from 110g/km.

It has an output of 130PS and will also be available for other Volkswagen models in the future.

The efficiency is achieved through a new TSI Miller combustion process and the use of a high-tech turbocharger with variable turbine geometry.

Active Cylinder Management (ACT) -  Whenever possible, ACT deactivates the two inner cylinders. It always does this at times when power demand is low. The deactivation function operates within an engine speed range of 1,400 to 4,000 rpm and at vehicle speeds up to 80MPH. The driver is made aware of the barely perceptible changeover from four to two-cylinder operation by the "2 cylinder mode" notification in the instrument display.

Eco-coasting - When combined with the seven-speed DSG dual clutch gearbox the drivetrain can be classified as a micro-hybrid system: as soon as the driver lets the car coast the engine management system switches off the engine completely and decouples it from the drivetrain by disengaging the clutch.

The micro-hybrid system utilises the 12-volt electrical system architecture and a compact lithium-ion battery to supply all relevant systems in the car with energy during the phases when the engine is inactive.

​Volkswagen has revealed the new Touareg, which will be officially unveiled on March 23 in Beijing.

Volkswagen is to produce a cabriolet version of its T-Roc from 2020 as the manufacturer continues its evolution into an SUV brand.