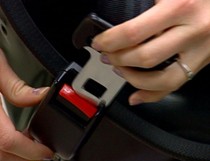 A fault with the rear seatbelt on new Volkswagen Polo, Seat Ibiza and Seat Arona models has been identified.

A design flaw allows the left rear buckle to be released unintentionally when carrying three passengers in the back seat.

The position of the centre seat belt buckle is higher than that of the left passenger and allows it to overlap and activate the release mechanism, if the car performs a sudden lane change.

The fault was identified by a Finnish motoring magazine Tekniikan Maailma, during road testing.

The magazine stated: “The reason for unlatching is a combination of buckle layout and too sensitive release buttons in the buckles manufactured by Takata.”

Volkswagen has confirmed a recall will be carried out in co-operation with the national vehicle registration authorities.

The brand has said it will inform customers and advise them not to have passengers use the middle rear seat of current Polo models until the cars have been equipped with the redesigned belt lock fixture.

Seat has also confirmed it has identifed the issue and said it will be communicating a decision shortly.