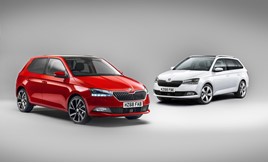 Skoda has announced the new range line-up, specifications and pricing for the facelifted Fabia, which will be available with petrol engines only.

As reported by Fleet News in February, the manufacturer has dropped the diesel engines for Fabia and it will instead be available with three-cylinder petrol power units.

Two MPI engines feature indirect injection and produce outputs of 60PS and 75PS respectively, while the two TSI engines generate 95PS and 110PS. Both TSI engines are fitted with a petrol particulate filter.

The range will feature five trim levels; S, SE, SE L, Monte Carlo and Colour Edition, and as with the current model, it will be available in hatch and estate forms.

LED daytime running lights are now standard across the range, while front assist and a Multifunction trip computer are included on all models for the first time.

Skoda has dropped all diesel options for its updated Fabia supermini range, instead focusing on small capacity petrol units.