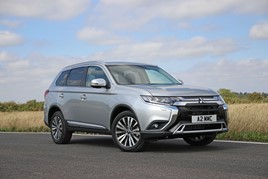 Mitsubishi has expanded the Outlander line-up with a new petrol version, priced from £27,680.

Official average fuel consumption is rated at 37.7mpg, although Mitsubishi has published the true WLTP figures (alongside the required NEDC correlated) which suggest 32.5mpg is a more accurate figure.

The new engine comes paired with all-wheel-drive and a CVT automatic transmission.

A seven seat configuration comes as standard, with the ability to fold the rearmost two seats into the boot floor. The second row seats also feature a tilting backrest and offer a sliding function allowing owners to adjust rear passenger leg room as required. When all five rear seats are folded, up to 1,608 litres of boot space is available.

The Mitsubishi Outlander Petrol is available now with the Juro version priced from £27,680 OTR and the range-topping Outlander 4 from £29,680 OTR.