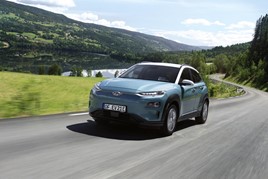 Kia Motors Europe and Hyundai have announced reduced ranges for their electric SUVs after an error in the homologation process was discovered.

Both the Kia e-Niro and Hyundai Kona Electric had been given ranges under the official Worldwide harmonised Light vehicle Test Procedure combined all electric driving range test.

The manufacturers say the independent organisation overseeing the process accidentally provided an incorrect testing methodology and then approved the results it generated.

This led to both models being tested for a disproportionate length of time on the WLTP ‘urban’ cycle – comprising lower overall vehicle speeds and a reduced energy requirement – resulting in an overestimation of the vehicle’s all-electric range.

The inconsistency in the test cycles was identified due to ongoing homologation work.

No other Hyundai or Kia models are affected by the issue.

Hyundai’s Kona Electric achieved a ‘real-world’ range of 259 miles on a single charge during a What Car? Real Range test – the highest of any vehicle tested.

Kia’s fully-electric e-Niro SUV is to go sale in the UK in April, with a price of £36,495 before the plug-in car grant is applied.