Hyundai Kona Electric is good fleet option in its own right, first drive

"Of course, it’s the diesel that will have the broadest appeal, but the Kona Electric is a good fleet option in its own right." 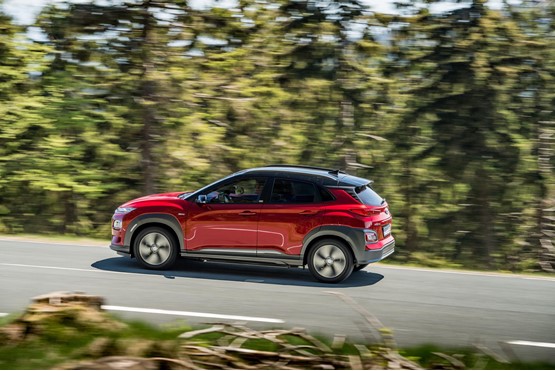 Hyundai has become a big player in the UK car market in the past 10 years, making its presence felt in both fleet and retail sectors.

But its investment in alternative fuels is perhaps more significant, relative to some brands with larger market shares.

In 2015, it put the world’s first mass-produced hydrogen fuel cell car, the ix35 FCV, on sale.

Two years ago, it launched the Ioniq, which offered customers the choice of a hybrid, plug-in hybrid or fully electric version of the same car.

Last year, it introduced the Kona – a rival for the Nissan Juke and Vauxhall Mokka X – with a petrol engine, and it is now ready to add diesel and electric versions to the line-up.

Customers will get the choice of two diesel and two electric power outputs.

The diesel is a new-generation 1.6-litre CRDi that complies with the forthcoming, more stringent EU6.2 emission rules.

It’s available with 115PS or 136PS, the former with a six-speed manual transmission and the latter with a seven-speed dual-clutch auto. Both are front-wheel drive and offer CO2 emissions between 111 and 114g/km.

The diesel works well, with 280Nm of torque from 1,500rpm, and engine noise is never intrusive. Also, while the Kona wouldn’t be the first choice of car to set lap records at the Nürburgring, it coped very well with a twisty part of the test route, slightly numb steering aside.

It is capable of good comfort on the motorway as well as an agile nature around town.

When the Kona was launched at the end of 2017, the range included a 177PS 1.6-litre turbocharged petrol version, but this is no longer the fastest version of the car.

From the end of August, the Kona Electric will be offered with a 39kWh version producing 136PS (from £29,495 on the road, excluding plug-in car grant), or a 64kWh variant producing 204PS.

Hyundai believes the higher power variant will have the greatest appeal, offering longer range as well as acceleration from 0-62mph of 7.6 seconds.

The only other compact electric cars with such swift performance are the BMW i3 – which is very slightly more expensive than the Kona Electric – and the Opel Ampera-E, which wasn’t made available in right-hand drive so there is no Vauxhall version.

The 39kWh version is more in the mainstream of EVs with cars such as the Nissan Leaf and Volkswagen e-Golf, but they are in the mould of a traditional hatchback whereas the Kona is a crossover.

Of course, it’s the diesel that will have the broadest appeal, but the Kona Electric is a good fleet option in its own right.

The 39kWh Kona Electric has a maximum range of around 194 miles on a full charge, with the 64kWh offering a potential 300 miles, hence Hyundai’s inkling that the more expensive version will be the most popular plug-in.

The Kona Electric’s design differs from models with an internal combustion engine. The radiator grille is blanked off for improved aerodynamics, while the centre console is ‘floating’.

Gear selection is via buttons with separate ones for P, R, N and D, and there is an electronic parking brake.

The Kona Electric feels very quick under acceleration, and even in the worst conditions for the battery, the 64kWh version should achieve a 200-mile range.

The battery warranty is for eight years/100,000 miles, while the rest of the car has a five years/unlimited mileage warranty. The Kona Electric also qualifies for the £4,500 plug-in car grant.

Equipment grades of both diesel and electric Konas reflect the rest of the range with SE as the entry point, and Premium and Premium SE above. The 64kWh Kona Electric isn’t available in the SE grade.

Hyundai moved swiftly years ago to offer diesels as good as the European manufacturers, and now invests to maintain their competitiveness. It is also big in alternative fuel cars, and the fact that the Kona range has such breadth is testament to what a major player the brand has become.