Average used car values fell by 1.7% in December as demand weakened, according to Cap HPI.

It was the weakest month for values since November 2017.

Electric vehicles showed the strongest average performance with values rising by 0.3% at three years and 60,000 miles.

Models such as the Renault Zoe, Nissan e-NV200 and Nissan Leaf continued to be in demand, with prices increasing, while Tesla and BMW models struggled to achieve cap clean prices.

“The pattern continues for the more affordable electric cars to be sought after, whereas at the higher end finding buyers is more difficult.

"As a new year gets underway, there is often a feeling amongst vendors and buyers that prices go up as we enter January. Over the last five years, the average value movement in our Live product during January has actually been a drop of 0.4%,” said Derren Martin, head of UK valuations at Cap HPI.

Cap HPI predicts a stable first month of the year for used values with prices unlikely to increase in the early days and weeks.

“2018 proved to be the year of the used car. Demand and prices held firm through the year, and many franchised dealers joined independents and car supermarkets in increasing their activity in the used arena. The trend looks set to continue into 2019,” added Martin. 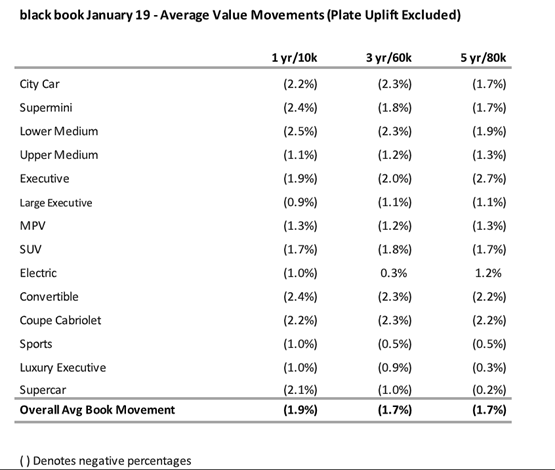