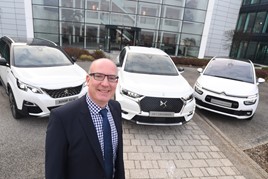 PSA Group’s UK fleet director Martin Gurney (pictured) has said there are no plans to “commercially integrate” the PSA and Vauxhall corporate sales teams “for the foreseeable future”.

It’s two years since Gurney oversaw the merger of the Peugeot, Citroen and DS fleet teams to form one PSA corporate sales team and while that move was the “right thing to do” for customers and from an “efficiency point of view”, according to Gurney, he doesn’t believe that Vauxhall, which became part of the PSA Group in 2017, should follow suit.

This is despite recent changes within the Vauxhall fleet team, with its fleet sales and remarketing director James Taylor being promoted to the new role of general sales director.

Gurney said that the Vauxhall business in the UK was currently “in a very different place to Peugeot, Citroen and DS”.

“It's no secret that Opel Vauxhall in Europe have had some very challenging times for the past 10 or 20 years and I think there is a big job for them to do, with the support of the group, to turn their business round, which they're already doing in a very impressive fashion,” he said.

However, he suggested that the PSA and Vauxhall fleet teams could share best practice and that there were “immediate benefits ‘back of house’”.

“Vauxhall has been a significant player in the fleet market for many years and there are undoubtedly lots of things we can learn from them and hopefully some things they can learn from us as well,” he said.

“There is no limit to what we can bring together ‘back of house’ in terms of common suppliers, common processes and all the inherent savings that gives us access to, and all of the improvements in service we can offer to customers.”