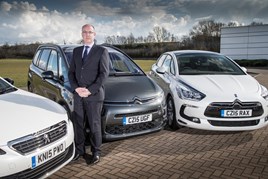 The PSA Group has combined its Peugeot and Citroën DS fleet teams to form a new PSA corporate sales team in a move which will bring “greater efficiency and reach”, according to director of fleet and used vehicles Martin Gurney.

“From January 3 we're fully PSA. There's not a Peugeot or Citroën DS specialist, if you like, in the team.”

The move marks the end of a “two-year journey”, according to Gurney. He had initially combined the back office support, leasing and rental functions of the different brands but kept the corporate sales teams separate because there “wasn’t really any overlap in the customer database”.

However, a cross-selling strategy has led to a significant rise in the number of customers who have Peugeot, Citroën and DS models on their fleet.

“We’ve got to the point now where there are more shared customers than separate customers,” Gurney said. “Customers were telling us the time was right to move to a PSA corporate sales structure.”

He added: “We wanted to do it in a measured, controlled way and in a way that was right for the customers. We've finally got there.”