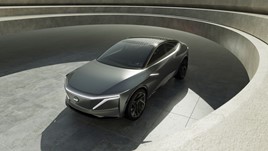 Nissan has showcased the IMs Concept, an electric performance saloon, at the 2019 Detroit Motor Show.

The IMs concept is designed for a new segment of “elevated sports saloons”, according to Nissan.

It features all-wheel-drive and has a total output of almost 500PS.

A folding rear bench seat allows the IMs to seat three in the back or to create a single ‘premier’ seat with added space and comfort.

An estimated range of 380 miles means the IMs Concept could be a rival for the Jaguar I-Pace, if it ever makes production.

Denis Le Vot, senior vice president, chairman of Management Committee, Nissan North America, Inc., said: “It makes sense that the first automaker to bring the world a mass-market EV would bring you the future of the electric high-performance sports sedan.”

“This IMs concept is the latest example of how we envision the future of mobility as we head toward our goal of zero emissions and zero fatalities on the road. It is an advanced study in progressive proportions, which has resulted in a completely new type of elevated sports sedan”