Kia e-Niro named Car of the Year by What Car 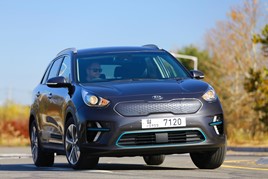 What Car has named the upcoming Kia e-Niro as its 2019 Car of the Year.

The fully electric model, which has a range of 253 miles, was honoured at the magazine’s 42nd annual awards ceremony at Grosvenor House, London.

The e-Niro beat 23 other category winners to take the overall title, becoming the first electric car to win the What Car Car of the Year Award.

What Car editor Steve Huntingford said: “The demand for electric cars has grown exponentially in recent years, and 2019 is shaping up to be the biggest year yet.

“Most of the leading manufacturers have plans for new EVs, and the fact that the Kia e-Niro was able to beat all its petrol and diesel rivals to win the 2019 What Car Car of the Year Award shows how far this technology has developed.

“The e-Niro stood out because it addresses the key issues of cost and range that have traditionally prevented many motorists from taking the plunge into EV ownership. Here is a spacious and practical family SUV that demands very few compromises.”

As well as taking home the main accolade, the Kia e-Niro was also named Electric Car of the Year.

Hyundai joined Kia in being recognised for its work with alternative fuels, being named winner of the Technology Award for its progress with electric and fuel cell technology.

Last year’s overall winner, the Volvo XC40, returned to be named Family SUV of the Year for a second year running, while the Skoda Octavia continued its run of success in the Family car category.

Car of the year - Kia e-Niro