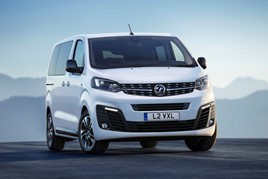 Vauxhall has announced pricing for the new Vivaro Life and says an all-electric version of the vehicle will be available in 2021.

The Vivaro Life is available in two trims – the Elite luxury limousine or the Edition passenger carrier – and will be in Vauxhall showrooms from late summer.

Priced from £40,705 on-the-road, the top-of-the-range Vivaro Life Elite has space for up to eight occupants, plenty of load space for luggage and a raft of innovative technology.

It will initially be offered as a diesel but the pure electric version will follow the year after next.

Elite is based on the same EMP2 modular platform (Efficient Modular Platform) that Grandland X and Combo Life both utilise.

A five-seater configuration is standard but the customer can option the third row to make it an eight-seater. There is also a second row option of two individual seats, which then enables a seven-seater layout.

The two individual seats swivel and can either face forward or be rotated for face-to-face conference seating. There is also an optional centre table.

Additional safety features are grouped together and are available in options packs, making it easier to add the level of security needed.

Located above the second row of seats, Elite also features a panoramic roof and when day turns to night, there are sliding blinds so passengers can recline and relax.

Elite also has dual electric sliding doors for getting in and out of the rear cabin, with intelligent sensors that give hands-free access. There is also a split tailgate with a handy opening rear window for quick and easy access to luggage space.

The all-new Vivaro range features an array of engines and transmissions. All are validated and approved to Euro 6D Temp (Euro 6.2) which utilises the more real world representative WLTP emissions cycle.

Priced from £27,210 on-the-road including VAT, all-new Vivaro Life Edition is a multi-functional passenger carrier which could be used as a work transportation vehicle or taxi, thanks to flexible seating and generous load space.

Edition offers further flexibility in the seating configuration as the second and third rows feature an individual folding third seat. This maximises flexibility for loading longer items of up to 2.4m alongside several passengers.

Edition replaces the Vivaro Combi and also competes in the minibus segment. Edition is aimed at businesses who require a functional people carrier. It has always had success as a donor for taxi and WAV/Motability conversions, and this will continue.

Vauxhall’s all-new Vivaro Life, which is based on Groupe PSA’s EMP2 platform, will be built at the company’s Luton manufacturing plant, helping to secure 1,250 jobs. Investment in the new vehicle will help increase the plant’s production capacity to 100,000 units per year.

Vauxhall has unveiled its Vivaro Life MPV, which will offer up to nine seats and go on sale in February.

PSA fleet boss Martin Gurney has said there are no plans to “commercially integrate” the PSA and Vauxhall corporate sales teams “for the foreseeable future”.