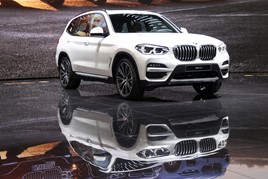 BMW has added a plug-in hybrid engine to the new X3 and revealed more details about the new 330e.

It has also showcased the X5 and 7 Series plug-in hybrids, which feature a new six-cylinder petrol engine and fitted larger batteries to its existing plug-in hybrid models.

The X3 xDrive30e will commence production at the end of the year. It will use a four-cylinder petrol engine and electric motor, providing 252PS with a 41PS over-boost feature.

CO2 emissions from the SUV will be 56g/km and the car will have a 31-mile electric range.

The 330e uses the same powertrain but is more efficient, emitting just 39g/km of CO2. It will cover 37 miles on the battery alone and provides acceleration from 0-62mph in six seconds.

The 745Le uses the same new six-cylinder engine, emitting from 48g/km of CO2 and providing a zero-emission range of around 30 miles.

Upgrades to the batteries in the existing BMW 530e and 225Xe Active Tourer see further improvements in range and emissions.