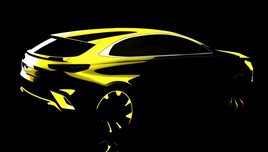 Kia has revealed the latest member of the Ceed family, a new crossover that will be launched this year.

Based on the new Ceed platform, the crossover version will be a rival for the Ford Focus Active and Volkswagen T-Roc.

Its size will place it between the Ceed Sportwagon and Sportage in the Kia range.

Gregory Guillaume, Vice President of Design for Kia Motors Europe, explains: “There’s another style, another type of vehicle, that we feel very strongly deserves to be a new member of the Ceed family. It will the play the role that’s needed to make the Ceed range stronger and even more exciting, more appealing, to European consumers. The design will be nothing like you’ve seen in the Ceed family so far. This will be the next big surprise from Kia.”

The new crossover is expected to be powered by the same engines as the current Ceed, so expect a 1.0-litre and 1.4-litre petrol and a 1.6-litre diesel.

Given the current market, it’s unlikely to be offered with all-wheel-drive.

Kia says it will reveal the name of the new model in the coming weeks, but it is expected that it will be called the XCeed.

The car is likely to make its debut at the Frankfurt Motor Show.

Kia’s ProCeed shooting brake will go on sale in the UK with prices starting at £23,835 and CO2 emissions from 110g/km.

Battery supply is one of the main reasons why order take for the full electric e-Niro has outstripped Kia’s 2019 allocation, according to executives.