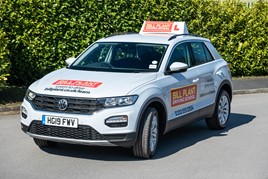 Bill Plant Driving School has signed a fleet deal with Volkswagen making it the new sole supplier for the nationwide driver training firm.

Instructors will use the T-Roc and Golf models as its tuition vehicles in the Volkswagen-only fleet.

The relationship between Volkswagen and Bill Plant Driving School began in late 2017 with the Golf being delivered to instructors in early 2018. Now, the success of that association sees Volkswagen become the sole supplier for the driving school’s fleet by the end of year.

Hundreds of cars have been delivered to Bill Plant Driving School instructors across the UK so far this year, with the potential for the school’s fleet to grow further still, as the business opens more franchises utilising Volkswagen Golf or T-Roc models as instructor vehicles.

Where the Golf is used, it is the Match model that is specified, while the T-Roc appears in in SE specification.

Michael O’Shea, Volkswagen UK’s head of fleet, said: “The Golf is Volkswagen’s most popular model and is a smash hit with UK customers, being the second best-selling car in the country, so it’s easy to see why learners can benefit from a Golf being their introduction to driving life.

“The T-Roc SUV, with its numerous safety features, elevated seating position and compact size, has the ideal combination of qualities to make learners feel at ease when venturing out on the road.”

“This is a tremendous partnership for Bill Plant Driving School as we continue to grow our business in 2019.”

Volkswagen is piloting a new live chat feature for corporate customers in an effort to make booking a fleet test drive easier.

The Volkswagen Group has announced plans to make 22 million electric vehicles within the next 10 years – 7m more than its original ambition.