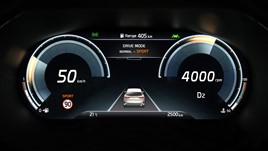 The all-new Kia XCeed urban crossover will be available with Kia’s first fully-digital 12.3-inch ‘Supervision’ driver instrument cluster when it is launched later this year.

Due to be fully revealed at the end of this month, the XCeed will be one of the most technologically advanced compact cars when it goes on-sale, claims Kia.

Emilio Herrera, chief operating officer at Kia Motors Europe, said: “Our new Supervision digital instrument cluster is one of a number of optional new technologies that will be available with the Kia XCeed.

“Boasting a wide range of features, particularly on higher-specification models, this cluster will play an important role in displaying critical information to the driver in a clear, unobtrusive way.

“It will be adapted for other Kia models in future, as we seek new ways to display useful and critical information to drivers on-the-move.”

With a high-resolution 1920x720-pixel display, the digital cluster replaces the conventional speedometer and tachometer dials found currently in the brand’s passenger cars.

Between the two digital dials is a multi-function display, controlled via the multi-function steering wheel. In this portion of the cluster drivers can see turn-by-turn navigation instructions clearly in their line of sight, as well as audio information, phone calls and contacts, and in-depth trip information. This includes live and average fuel efficiency levels.

The multi-function central display also shows cues from the car’s Driver Attention Warning system, advising drivers to take a break if it detects signs of fatigue.

The new digital instrument cluster is available as an option in the Kia XCeed, depending on market and vehicle specification. It replaces the physical dials and 3.8-inch mono-LCD or 4.2-inch colour TFT LCD screens available with different specifications of vehicle.

Kia has recalled more than 5,000 Niro hybrid and plug-in hybrid models due to an electrical relay that could overheat.

Kia has confirmed pricing for the all-new Xceed urban crossover, which is available to order now with first deliveries due in September.