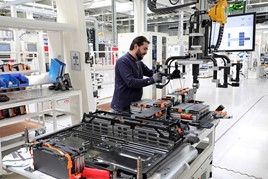 The European non-governmental organisation made the claim as official new data from the EU’s environmental watchdog (EEA) shows that the CO2 emissions of new cars increased by 1.6% in 2018 to 120.4 grammes of CO2 per km. For the first time, CO2 emissions from vans also rose, by 1.2%.

The main driver is the rising sales of polluting yet very profitable SUVs, says T&E.

The average petrol SUV sold last year emitted 133g/km of CO2 while the average of other petrol cars sold was 120g/km of CO2, according to provisional EU data suggests.

“It may please their shareholders but it’s a tragedy for our planet. These figures are a stark reminder that governments need to be much more forceful when it comes to promoting zero emission vehicles, in particular by reforming vehicle taxation and rolling out charge points.”

There are many ways to reduce average car emissions, notably by selling hybrid or electric cars, says T&E. But, carmakers in Europe are lagging behind China and the US in selling battery electric vehicles, with BEVs accounting for just 1% of new cars sold in 2018, according to the EEA.

T&E claims EU carmakers have suppressed the choice of models and their availability, with only 25 battery electric or hydrogen models available in 2018, to ‘save’ zero-emission cars to comply with stricter CO2 limits in 2020 and 2021.

The average CO2 emissions cap for new cars in the EU is being cut from 130g/km to 95g/km and will be phased in from 2020, before being applied across all new registrations from 2021.

Poliscanova concluded: “When it comes to the environment, carmakers only do what the law tells them to do. So they’re all waiting for 2020 when the CO2 standards kick in to roll-out enough plug-in cars to comply with the EU CO2 law. Aided by cheaper batteries and better performance, they will have no difficulty selling them to European consumers.”

"Manufacturers are investing billions in ultra-low and zero emission vehicles and there is simply no benefit in holding them back – indeed there are more than 40 plug-in models on sale with many more to come this year," he said.

"While industry can introduce the technology it cannot dictate the pace of change. Growing demand is dependent on critical factors, including charging infrastructure and financial incentives and manufacturers want uptake to accelerate given the environmental benefits and significant investments being made.”

Petrol SUVs achieved the highest true fleet sales in the UK last month, according to Dataforce.

The automotive industry could be facing a new emissions scandal as Emissions Analytics uncovers discrepancies in petrol car emissions figures.