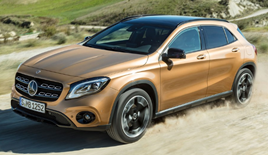 Petrol SUVs achieved the highest true fleet sales in the UK last month, according to Dataforce.

The true fleet market enjoyed its best performance in growth in November, reducing the gap toward 2017 from a 22.5% difference in September, and over 6.1% in October to a mere 1.3% last month.

Still, with the year-to-date growth standing at ‑ 7.0% not even a super buoyant December is likely bring back the annual growth into the black. 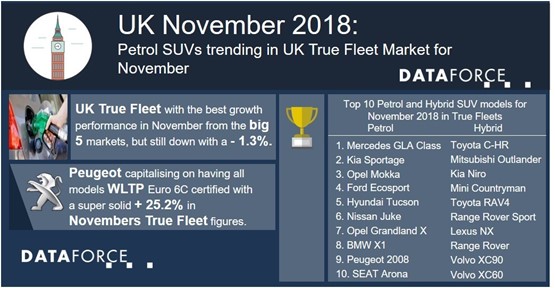 In terms of brands, November was another month were VW had the edge on both Ford and Vauxhall while BMW also overtook the duo thanks to more than 550 additional registrations for the 5 Series.

Mercedes claimed rank number four, followed by Kia that doubled fleet registrations of the Picanto (+ 138.9%), tripled them for the Niro (+ 240.3%) and even quadrupled registrations for the Stonic (+ 352%).

The next three positions went to Nissan, Audi and Toyota, with the German brand still struggling with WLTP homologations and thus almost 50% behind its November 2017 figures.

In contrast, Peugeot had its complete range certified to Euro 6c or better and has now capitalised on this with a 25.2% increase.