The majority of car makers will not have to pay any fines for exceeding their CO2 emissions targets in 2020, according to a study by Data Force.

This is despite the actual emissions from cars sold across Europe exceeding the 95g/km fleet average by 13g/km.

According to data from 22 EU countries plus Iceland, Norway and the UK, the average passenger car registered in 2020 has emitted 108 grams of CO2 per kilometre. On a brand level, just the BEV-only manufacturers plus DS, MG, Renault, and Toyota can reach this threshold. 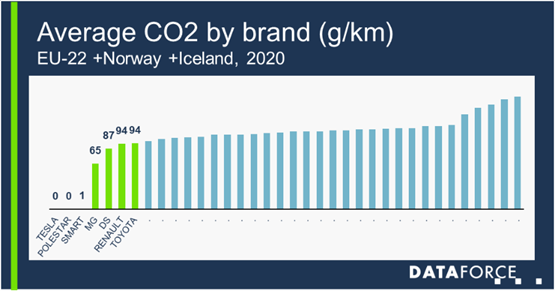 Several manufacturers entered pooling arrangements, in line with EU rule, which allows manufacturers with higher emitting vehicles to offset them against sales of low-emission models from other brands within the pool.

FCA teamed up with Tesla and Honda, Mazda with Toyota, Ford combined its registrations with Volvo and Polestar, and the VW group integrated a couple of the smaller EV-focussed manufacturers: MG, Aiways, LEVC and e.go.

Supercredits allowed BEVs and PHEVs below 50g/km to be counted twice. However, most groups had so many of those registrations they reached the reduction cap of 7.5g/km. For Hyundai and Kia these were sufficient to achieve their targets, according to Data Force. 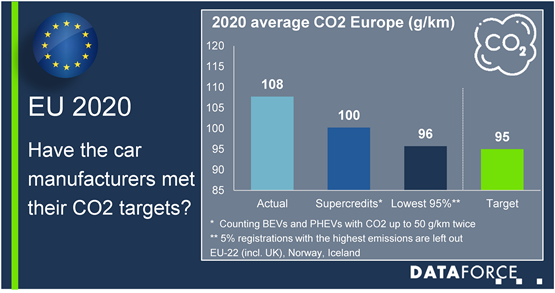 Each manufacturer or pool is also allowed to remove 5% of their registrations with the highest emissions from the calculations for 2020. This has led to an effective reduction between 3 and 7g/km. According to Data Force, BMW, FCA-Tesla-Honda, Daimler and Renault-Nissan-Mitsubishi will need to take advantage of this.

Calculations by Data Force show Ford-Volvo, PSA and Toyota-Mazda will be above their targets, but should be close enough to reach compliance when factoring in Eco-Innovations. These are technologies that do not affect lab test results but still reduce fuel consumption in real life can lead to further reductions by up to 7g/km.

VW-SAIC has already announced that it has missed its target by 0.5%, with a fleet average of 99.8g/km and is expecting to face fines of up to 100 million euros.

The success of Audi’s e-tron model contributed to the group’s overall reduction of 20% with demand for the electric SUV growing by almost 80% last year and achieving more than 47,000 sales across Europe.

At the start of the 2020, Europe’s 13 top car manufacturers were predicted to miss their 2021 CO2 emissions targets and face fines of more than €14.5bn (£12.5bn), according to analysis by PA Consulting.