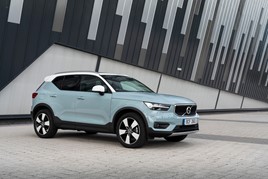 The 1.5-litre three-cylinder T3 petrol engine, introduced to the range last summer, benefits from an increase in power, from 156 to 163hp. It is also now available for the first time with the option of an eight-speed automatic transmission, in addition to the existing six-speed manual gearbox.

As a result of the changes, efficiency has improved, with WLTP combined fuel economy of between 37.2 and 41.5mpg for the T3 manual, against figures of 36.7 and 39.8mpg for the previous version. The manual car’s CO2 emissions are also lower, ranging from 142 to 146g/km, compared with 144 and 148g/km previously.

The 2.0-litre four-cylinder T4 petrol engine is now available with two-wheel drive, to complement the existing all-wheel-drive version. The front-wheel-drive T4 comes with a combined fuel economy ranging from 33.6 to 36.7mpg. The T4 FWD is priced £1,400 below the equivalent AWD version.

Furthermore, all versions with an automatic transmission now come as standard with paddle shifts mounted on the steering wheel.

Equipment changes include the addition of auto-folding door mirrors, a 12v power outlet in the luggage compartment, a locking glovebox and a load protection net.

Meanwhile, there is a new Winter Plus pack option, which adds a heated steering wheel and heated rear seats to the contents of the established Winter pack (heated front seats, a heated windscreen, headlight cleaning system and heated washer nozzles).

It is also introducing an upgraded Blind Spot Information System option with a new Steer Assist function to the XC40 range. This automatically applies corrective steering to return the XC40 to its lane to help avoid the risk of collision with another vehicle in the driver’s blind spot.

To complete the updates to the XC40 range, there are three new exterior paint finishes to choose from: Thunder Grey, Glacier Silver and Pebble Grey.

Kristian Elvefors, Volvo Car UK managing director, said: “The XC40 has been a huge success since it arrived in UK showrooms early last year, and these new powertrains will only enhance its appeal to customers who want a desirable and distinctive premium compact SUV, which offers class-leading interior usability, connectivity and safety technology.”

The XC40 has already been a hit with fleets, scooping the coveted title of New Company Car of the Year at this year’s Fleet News Awards, having been exclusively voted for by fleet-decision makers.

The XC40 range will soon expand further with the introduction of a T5 Twin Engine petrol-electric plug-in hybrid variant, UK deliveries of which will start in early 2020. Full details of the T5 Twin Engine will be announced shortly.

Read our review of the Volvo XC40.

The new Volvo XC40 and Ford Focus have each achieved the maximum five-star Euro NCAP safety rating in testing for Euro NCAP in July.

WLTP compliance along with a focus on safety have helped the XC40 become the fleet vehicle of choice for Asda managers, say Volvo.