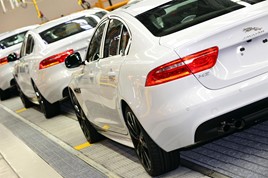 Despite record sales in the UK, which saw volumes rise by 2.6% year-on-year for the period to June 30, the manufacturer said that factory downtime booked in anticipation of Britain leaving the EU in April and delays in WLTP certification have contributed to the decline.

JLR chief executive, Prof Ralf Speth, said: “Despite challenging conditions in the first quarter, Jaguar Land Rover is creating a more robust and resilient business, in which we will continue to deliver a strong pipeline of products that our customers will love.

“Breakthrough products such as the exciting all new Land Rover Defender will pave the way for sustainable profitable growth.”

Revenues slipped 2.8%, to £5.1 billion, as the British carmaker slipped back into the red following its reporting of a profit of £120m between January and March.

Tata Motors-owned JLR reported a profit of £120m between January and March, and insists that it will return to profit this year on the back of cost-cutting and new model launches.

JLR has been hampered by the impact of global trade wars, which have hampered its sales in China, and is yet to realise the benefits of the launch of new Land Rover Defender range.

The new Range Rover Evoque, launched earlier this year, is also expected to ramp-up its contribution to the manufacturer’s sales fortunes across the globe, with additional growth anticipated in the US.

Earlier this month the company also announced its plan to spend close to £1bn installing electric tooling in its Castle Bromwich factory to build three new electrified models, the first of which will be the next generation all-electric Jaguar XJ EV.

The UK Government has announced that it would underwrite JLR’s EV programme spending to the tune of £500m as part of a £625m loan facility expected to be completed in the coming months and amortize over five years.

British carmaker posted a £358 million loss in its latest set of annual financial results – despite returning to profitability in Q4.