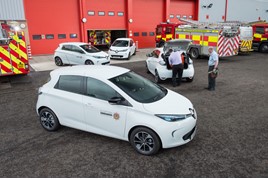 The world’s fourth largest fire and rescue service will use the cars as general pool vehicles, with each covering at least 10,000 miles a year.

They will be used by uniformed staff, office employees and management to interact with the public in non-emergency situations, which span free home safety visits to commercial events.

The Zoe cars, which has a range of 186 miles, will be distributed at sites across Scotland, including all major cities as well as Orkney and the Shetland Islands.

Scott Roberts, fleet manager at SFRS, said: “The best way to deal with an emergency is to prevent it from happening, and the Zoes will play a vital role in how we engage with communities and deliver our crucial safety messages.

“Introducing them has been a major step in our future direction and while we have previously adopted hybrid technology with a handful of vehicles, they felt more like a box ticking exercise and never really worked on a practical or financial basis.

“With the Zoe, we can see that having environmentally-compatible electric vehicles is a viable business model.”

The Zoe models have replaced traditionally fuelled hatchbacks and now account for nearly a quarter of SFRS’s pool car fleet.

SFRS is installing up to six charging points at each site, while additional charging will be carried out via ChargePlace Scotland – the country’s government-supported public EV charging network.

Roberts said SFRS will replace all its pool cars with Zoe models, and is evaluating the Kangoo ZE with a view to introducing it to its compact van fleet.

Earlier this month, Renault announce a revised Zoe with a range of 245 miles.