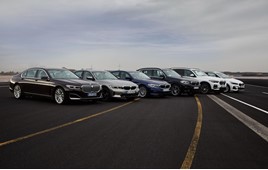 It uses the same powertrain as the BMW 330e, giving an all-electric range of 34 miles and CO2 emissions of 49g/km.

The 2.0-litre turbocharged petrol engine develops 252PS when combined with the electric motor. There is also an XtraBoost function that increased power output by 41PS at the touch of a button.

Drive is transmitted – both in hybrid and electric modes – via an eight-speed Steptronic gearbox and xDrive all-wheel drive. It enables the BMW X3 xDrive30e to accelerate from zero to 62mph in just 6.1 seconds.

Regenerative braking helps to optimise efficiency. The system’s high-voltage battery stores the energy captured during braking, with the electric motor taking on the function of a generator. The high-voltage battery also supplies the vehicle’s electrical system. This means that a generator powered by the combustion engine is no longer necessary, increasing overall efficiency.

The battery is located under the rear seat to save space, helping to deliver a luggage capacity of 450 litres.

The new plug-in hybrid X3 joins the larger X5 xDrive45e and will soon be part of a trio of low-emission BMW SUVs when the X1 xDrive25e is launched early next year as the seventh plug-in hybrid offered by BMW.

BMW Group’s latest electric and diesel models will have their fleet event debut at Fleet Live on October 8-9 this year.