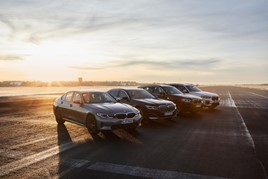 The eDrive Zones will be a standard feature in BMW plug-in hybrid vehicles as of 2020.

Additionally, the BMW Points app offers a source of motivation for PHEV customers to get the most out of their electric drive. Miles covered using electric power are rewarded with points. High-voltage battery charging is also rewarded under the BMW Points scheme. In this way, drivers are encouraged to give preference to electric drive as often as possible – not just based on environmental awareness but also out of a sense of competitiveness.

By collecting a sufficient number of points, participants can gain access to rewards such as free charging volumes on Charge Now; in the medium term, this will also include products of the Share Now and Park Now brands as well as those available in the Connected Drive Store.

The first real-life trial after the brainstorming phase for the new BMW eDrive Zones function and the digital service BMW Points was the pilot project “Electric City Drive” conducted by the BMW Group in collaboration with the city of Rotterdam and Erasmus University.

Studies were carried out there in 2018 to examine whether it might be possible to encourage electric driving of plug-in hybrid vehicles by defining an inner city zone and offering an app that encourages regular charging in a “fun” way.

A group of 50 volunteer plug-in hybrid drivers from the Rotterdam area were provided with a specially developed app for this purpose. Once they had installed it on their smartphone and paired it with their vehicle, they received a message on their vehicle screen whenever they entered the defined eDrive Zone in the city centre of Rotterdam – along with a request to switch the drive system of their plug-in hybrid into fully electric mode. Over a period of three months, research was carried out to establish the extent to which project participants increased their volume of electrically powered driving as a result of receiving such messages.

A beta version of the BMW Points App also enabled them to monitor their progress as compared to other participants, take part in competitions and collect points. The key insight was that PHEV drivers covered 90% percent of all routes inside the Rotterdam eDrive Zone running on electric power alone when they had the app connected to the vehicle.