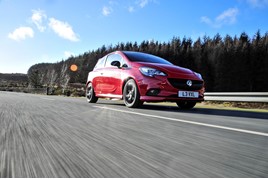 Fleet registrations showed signs of a return to growth with a 2.8% increase on last year’s performance.

Overall fleet sales for the year now stand a 0.3% up. Registrations classified as ‘Business’ are still in decline though, falling -3.2% in November and sitting at -35% year-to-date. 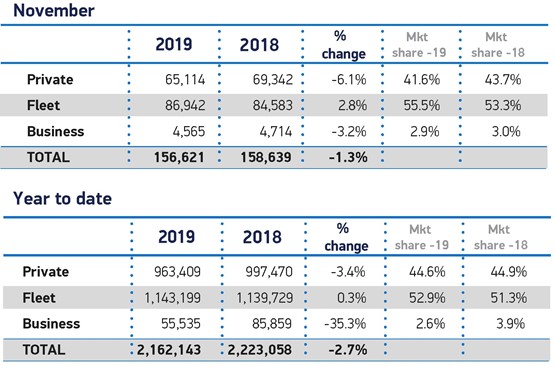 Demand for the latest battery electric cars surged by 228.8%, with 4,652 registered.

Plug-in hybrid models returned to for this month too, growing 34.8% to reflect the breadth of new models now available.

Mike Hawes, SMMT chief executive, said: “These are challenging times for the UK new car market, with another fall in November reflecting the current climate of uncertainty. It’s good news, however, to see registrations of electrified cars surging again, and 2020 will see manufacturers introduce plenty of new, exciting models to give buyers even more choice.

“Nevertheless, there is still a long way to go for these vehicles to become mainstream and, to grow uptake further, we need fiscal incentives, investment in charging infrastructure and a more confident consumer.”

Michael Woodward, UK automotive lead at Deloitte, added: “After significant investment in the technology by manufacturers, the growth of BEVs is welcomed in the industry. Demand for BEVs is also expected to accelerate when 0% company car tax rates on zero-emission vehicles are likely introduced in April 2020. However, this level of growth presents a number of challenges as we enter a new decade. Not only is significant investment required in the UKs charging infrastructure, but as BEVs continue to grow, the long term implications for tax revenues are unclear.”

The Vauxhall Corsa achieved the most registrations in November, despite being imminently replaced. It was closely followed by the Ford Kuga SUV.

The best-selling car year-to-date, the Ford Fiesta, took third place in November with just under 4,000 registrations.

It was followed by the VW Golf, which is also being replaced very soon.

The year-on-year reduction in true fleet registrations has accelerated in the second quarter of 2019 with just a handful of manufacturers enjoying growth, primarily on the back of new product launches

Fleet and business new car registrations declined by 2.6% in the first three quarters of the year, new figures from the SMMT show.

Registrations of fleet vehicles up 8.6% YOY

87% of vehicles sold first-time at Manheim in September as demand for stock exceeded supply in September wholesale market.