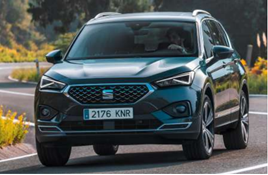 Seat has expanded the Tarraco line-up by mating its 1.5-litre TSI turbocharged petrol engine with a seven-speed DSG automatic transmission.

The manufacturer says the new powertrain will give the car greater potential in the fleet market.

It’s the first Tarraco to be offered with front-wheel-drive and a DSG transmission.

From April, the new model will attract a 35% Benefit-in-kind tax rate due to its CO2 emissions of 164g/km (WLTP).

Fuel economy is rated at 35.3mpg and the new engine can propel the large SUV from 0-60mph in less than 10 seconds.

Launched in February 2019, the Tarraco expanded Seat’s SUV family from two (Arona and Ateca) to three.

With seven seats, the new model was a departure from Seat’s usual sporty setup, putting more emphasis on comfort.

In 2020, a plug-in hybrid version of the Tarraco will be launched. It will be the most efficient model, with CO2 emissions of around 50g/km – making it the most popular with company car drivers.

The PHEV will also be the most powerful Tarraco, with 240PS available from its petrol engine and electric motor combo. A 13kW battery will provide up to 30 miles of emission-free driving.

Tarraco is priced and equipped to compete strongly with segment rivals

Seat UK has named Craig Cavanagh as its new head of fleet, replacing Peter McDonald who left the business in August.