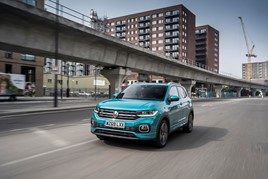 It is the second time the T-Cross line-up has been expanded with a new engine, after it welcomed a 1.6-litre 95 PS diesel last year, in addition to the 1.0-litre three-cylinder TSI units offering 95 PS and 115 PS at launch.

With the more powerful, four-cylinder 1.5-litre turbocharged engine installed, Volkswagen says that this variant is the swiftest T-Cross available, taking 8.5 seconds to reach 62 mph from standstill, before going on to a top speed of 124 mph where permitted.

It returns 44 mpg on the combined WLTP cycle while emitting 118-119g/km of CO2 (NEDC), depending on specification.

The new engine will be offered on the SEL and R-Line trims, and will be available exclusively with a 7-speed DSG transmission, bringing the number of engine and gearbox configurations for the T-Cross up to a total of six.

Both variants get front and rear parking sensors, Adaptive Cruise Control (ACC) with Front Assist, LED headlights and an 8.0-inch Discover Navigation infotainment system as standard, as well as two USB ports in the rear of the car.

The T-Cross’s signature sliding rear bench also features on both trims, maximising versatility by giving the choice between an extra 14 cm of leg room for rear passengers, or an additional 70 litres of luggage volume.

Claire Haynes, T-Cross product manager at Volkswagen UK, said: “At Volkswagen, we are committed to making sure we live up to our People’s Car name by making a car for everyone. The T-Cross is no different, and those who would like an even more potent engine can now be catered for.

“The T-Cross’s motto is ‘I am more than one thing’, and the addition of this punchy new engine into the mix only goes to broaden the appeal of the car still further.”

The new Volkswagen T-Cross small SUV is available to order now, priced from £16,995.

Volkswagen has added a 1.6-litre diesel engine to the T-Cross line-up, taking the place as the most fuel efficient model.