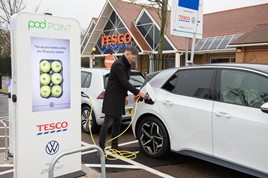 Almost 100,000 electric vehicles (EVs) are expected to be sold this year, according to forecasts by DriveElectric.

The EV leasing company predicts a 260% rise in BEV registrations compared to 2019, when 37,850 were registered.

DriveElectric says the changes to Benefit in Kind (BIK) company car tax will be a big driver of EV registrations this year. There will be zero company car tax on pure electric cars from April 2020 for a period of 12 months, if the figures published in the Government’s Finance Bill are adopted.

A number of successful trials have been carried out by companies, with the aim to show sceptical drivers that an EV can work for them.

More drivers are expected to return to company cars - rather than taking car allowances - according to DriveElectric, which says there is already evidence to show that this change is happening.

Other that concerns about range and charging, availability has been the key issue in the transition to EV for fleets.

Models such as the Kia e-Niro and Hyundai Kona Electric have been subject to tiny volumes in the UK, with waiting lists already stretching beyond half a year.

DriveElectric says availability of electric cars is expected to increase in 2020, driven by the new EU fleet-wide average emissions targets.

It believes existing manufacturers, such as Tesla, will continue with a large market share this year and a high number of deliveries. While other manufacturers are entering the market with new battery electric vehicles, like PSA.

Volkswagen will also have a big push with EVs, although the new ID 3 won’t be ready to roll out of UK showrooms until later in 2020.

Many of the new models, however, are subject to private-buyer focuses pre-orders with only a handful of cars available to fleet customers via dealers.

Fleet operators have also voiced concerns over the higher purchase costs of EVs compared to petrol and diesel cars.

Traditional barriers to the adoption of EVs, such as range and charging infrastructure, no longer fill fleets with anxiety, a new survey suggests.

There are fears that UK could be faced with a shortage of ultra-low emission vehicles (ULEVs) depending on OEM strategy, Fleet Logistics warns.