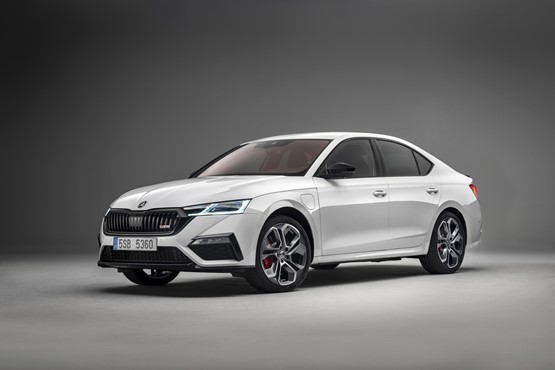 It will be available in hatchback and estate bodies alongside a more sedate plug-in hybrid model and two new mild-hybrid versions as Skoda expands it’s electrified line-up.

The Octavia VRS iV has a maximum output of 245PS, yet emits just 30g/km (WLTP) of CO2 making it a sound company car choice for those that want something a little more exciting.

With a 13kWh battery, the car has an electric range of 37 miles. It adopts a sporty demeanour thanks to its black 18-inch alloy wheels, bodykit and red brake calipers.

Acceleration from 0-62mph takes 7.3 seconds, while the car’s steering and suspension has been specially tuned to deliver a more engaging drive.

Electric range and CO2 emissions are the same as the more potent VRS version.

The two e-TEC versions of the Octavia are also making their debut. They will be the brand’s first production cars to feature mild hybrid technology.

When combined with a seven-speed DSG, the three-cylinder 1.0 TSI producing 110 PS and the four-cylinder 1.5 TSI outputting 150 PS make use of a 48-volt belt-driven starter motor and a 48-volt lithium-ion battery that is located under the front passenger seat and has a capacity of 0.6 kWh.

In total, the mild hybrid technology used for the e-TEC engines allows for savings of up to 0.4l of fuel per 60 miles.