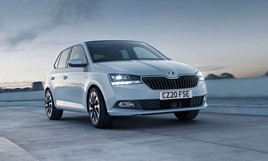 SE Drive for the Fabia is based on the already well-equipped SE model, but adds 16-inch Aronia alloy wheels, an Amundsen satellite navigation system with Infotainment Online for one year and front and rear parking sensors as standard.

Also included as standard are a surround sound package with six speakers, Smartlink+ for connectivity with mobile devices, air conditioning and a three-spoke multifunction steering wheel.

This extra kit would normally cost SE buyers an additional £1,345 in options but the SE Drive costs £855, offering a £365 saving.

The Karoq SE Drive is available with two petrol engines with outputs of 115PS and 150PS, and two diesels that generate 115PS and 150PS. The 2.0 TSI 150PS petrol and the 1.6 TDI 115PS diesel can both be specified with a seven-speed DSG transmission.

Meanwhile, the Kodiaq SE Drive is available with two engine options, a 1.5 TSI 150PS petrol (manual or DSG) and a 2.0 TDI 150PS diesel (DSG only). The Kodiaq SE Drive has a range of standard equipment, including the Amundsen satellite navigation system with Infotainment Online for a year, a colour trip computer, rear view camera, rear LED tail lights and front and rear parking sensors.

Combined, this extra kit would normally cost SE buyers an additional £1,850 in options. However, with the SE Drive costing £1,485 more than the standard SE, customers save £365 by choosing the new model.

All SE Drive models are available to order now, with the first deliveries anticipated mid-March.

Enyaq will be the name of Skoda’s first electric SUV based on the Volkswagen Group’s Modular Electrification Toolkit (MEB).

Blue-light fleet sales at Skoda up 75%

Emergency services sales increased by 75% in 2019 compared to the previous year at Skoda, with nearly 800 models sold.