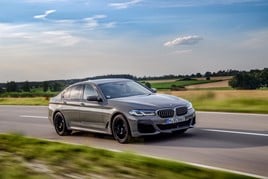 BMW is expanding its 5 Series range with a new 545e plug-in hybrid that will sit alongside the existing 530e.

It will be introduced towards the end of the year, becoming the fifth plug-in hybrid 5 Series derivative.

Utilising a straight-six petrol engine, as found in the 745e and X5 plug-in hybrid, the 545e is more powerful and more refined than the 530e but still manages a respectable 38g/km and an electric range of 34 miles.

Power is delivered to all four wheels using an xDrive all-wheel-drive system. The electric motor is integrated into the eight-speed gearbox, so the car can power all four wheels when running on electric, petrol or both.

The 545e’s introduction follows a recent facelift for the Fleet News award-winning model, which introduced a new-look front end, enhanced infotainment and expanded range of powertrains.

It will feature BMW’s new eDrive Zone feature, which allows the car to automatically switch to EV mode in city centres.

The digital service uses geo-fencing technology via GPS to identify designated areas. eDrive zones of this kind are currently designated in some 80 cities throughout Europe, including London and Birmingham.

BMW has revealed the production version of its iX3 electric SUV, the second fully electric model from the brand.