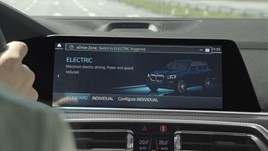 BMW has introduced a new eDrive Zone feature on its plug-in hybrid (PHEV) models, which allows the car to automatically switch to EV mode in city centres.

BMW eDrive Zone will be a standard feature of all plug-in hybrid models of the BMW 3 Series, BMW 5 Series and BMW 7 Series as well as the BMW X5.

The digital service uses geo-fencing technology via GPS to identify designated areas. eDrive zones of this kind are currently designated in some 80 cities throughout Europe.

When the service is activated, each available eDrive Zone on the navigation map is graphically highlighted in the Control Display: a message appears to inform the driver that the vehicle will automatically switch to electric driving mode as soon as it enters an eDrive Zone.

From summer 2020, plug-in hybrid models will also be fitted with an integrated drive-ready sound for electric power as standard. This means that both starting and stopping the electric drive will be accompanied by a distinctive acoustic signal.

There has been an expansion of the range of preconditioning functions too, which is also a standard feature. Depending on the equipment fitted, more functions will be available that can be activated remotely by smartphone, in addition to interior cooling and heating.

In future it will be possible to include the seat, steering wheel, exterior mirror and rear window heating systems in the preconditioning for heating the interior, as well as heating of the cameras for the driver assistance systems.

The update package also includes an expansion of mild-hybrid engines across the BMW range.

From August 2020, mild-hybrid engines will be fitted to 51 models, including the new in-line 6-cylinder diesel engines in the BMW 7 Series and in the X3, X4, X5, X6 and X7. The mild-hybrid powertrains are already offered in the 3 Series and 5 Series.

It consists of a 48-volt starter generator that enables particularly intensive braking energy recuperation along with an additional battery to store the electricity that is generated in this way.

The 48-volt battery not only supplies the electrically operated vehicle functions, it also makes its energy available to generate additional drive power. For this purpose the current flows back to the starter generator, which now takes on the role of an electric drive. This reduces the load on the combustion engine, allowing it to run as often as possible in an efficiency-optimised load range.

The generator creates an electric boost during acceleration, providing an additional output of 11hp to support power delivery during start and acceleration.

BMW is continuing to develop hydrogen powered cars, as part of a collaboration with Toyota.

BMW’s X2 xDrive25e plug-in hybrid is to offer an electric-only range of 33 miles and CO2 emissions from 38g/km.