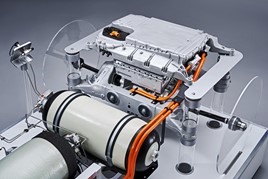 BMW is continuing to develop hydrogen powered cars, as part of a collaboration with Toyota.

The German brand says it plans to test its next-generation powertrain in prototype X5, in 2022.

Named the BMW i Hydrogen NEXT, the powertrain combines a hydrogen fuel cell with BMW’s new eDrive electric unit.

Fuel cells from the cooperation with Toyota will be deployed in the BMW i Hydrogen NEXT, alongside a fuel cell stack and overall system developed by the BMW Group.

A peak-power battery enables the system to deliver up to 374PS, while producing no emissions. Refuelling the vehicle will take three-to-four minutes.

Klaus Fröhlich, member of the Board of Management of BMW AG, Research and Development, said: “We are convinced that various alternative powertrain systems will exist alongside one another in future, as there is no single solution that addresses the full spectrum of customers’ mobility requirements worldwide.

"The hydrogen fuel cell technology could quite feasibly become the fourth pillar of our powertrain portfolio in the long term.

Although the BMW Group has said that it has no doubt as to the long-term potential of fuel cell powertrain systems, it will be some time before the company offers its customers a production car powered by hydrogen fuel cell technology. This is primarily due to the fact that the right framework conditions are not yet in place.

The OEM believes hydrogen will be used primarily in applications that cannot be directly electrified, such as long-distance heavy duty transport.

According to BMW, the requisite infrastructure, such as an extensive, Europe-wide network of hydrogen filling stations, is lacking at present.

However, it is pressing ahead with development work in the field of hydrogen fuel cell technology.

The company is using the time until the infrastructure and sustainably produced hydrogen supply are in place to substantially reduce the cost of manufacturing the powertrain system.

In the meantime, a total of 25 electrified models are slated for launch by 2023, including at least twelve with an all-electric powertrain.

Fleet Poll
Have you recently received an incorrect tax code for a company car from HMRC?
Vote
View all
63