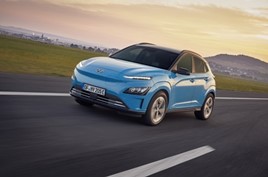 Hyundai will recall 82,000 electric cars globally in order to replace their battery packs due to a fire risk.

The issue primarily affects the Kona Electric model, with an estimated 75,000 vehicles expected to get a new battery pack, as well as the Ioniq Electric.

There have been 15 cases of fires involving the Kona Electric, according to Reuters.

A statement issued by Hyundai said: “Hyundai Motor Company has decided to voluntarily recall certain Kona Electric, Ioniq EV, and Elec City vehicles in Korea for battery system assembly replacements. The issue is being investigated by the company, including to establish the situation in relation to the models sold in Europe.”

LG Energy Solution, a division of LG Chem which manufactures the batteries, claims that Hyundai misapplied its suggestions for “fast-charging logic in the battery management system”, and says the battery cell “should not be seen as the direct cause of the fire risks”.

The car maker and battery supplier are reported to be negotiating over how the estimated £638m cost of the recall will be split between the companies.

Kia models, such as the Niro EV and Soul EV, which share similar architecture are unaffected by the recall as they use battery packs manufactured by SK Innovation.

In late 2020, Ford and BMW were forced to recall a number of plug-in hybrid models due to a battery fire risk. Those batteries were made by a different supplier to Hyundai's.

Hyundai will launch three new electric vehicles in the next four years, under its new dedicated brand Ioniq.

Hyundai has updated the Kona Electric SUV with revised styling and new technology. It's now priced from £33,070 (P11d).

Hyundai has updated its Ioniq 5 electric hatchback for 2023, with a larger battery and revised specification.