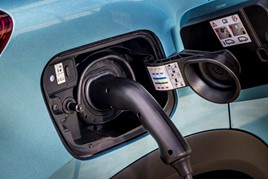 The EU has set a target of banning the sale of new petrol and diesel cars by 2035 as part of its Fit for 55 decarbonisation plan.

The proposed legislation would also require countries to install public charging points no more than 60 km (37.3 miles) apart on major roads by 2025 in a bid to boost EV adoption.

The plan, published this week, also includes a reduction to zero CO2 emissions from new cars sold in the bloc by 2035, as it seeks a 55% reduction in CO2 emissions by 2030 compared with 2021 levels.

The target accelerates the previous plan, which targeted a 37.5% reduction by the end of the decade.

Passenger cars account for about 12% of total EU CO2 emissions, so curbing that output will be key to achieving the bloc’s overall climate goals.

Helen Clarkson, CEO of the international non-profit Climate Group, said: “This is the sort of ambition we’ve been waiting to see from the EU, where it’s been lacking in recent years.

“The science tells us we need to halve emissions by 2030, so for road transport it’s simple – get rid of the internal combustion engine.”

She continued: “We’re encouraged to see the EU propose a revision to car CO2 emission standards to bring forward the end of sales of new petrol and diesel vehicles to 2035 – this target is not only possible but would ensure Europe maintains its role as a leader in the climate transition. Beyond this, it’s encouraging to see commitments to invest in charging infrastructure.

“Members of the EV100 initiative have committed to adopting zero emission fleets by 2030. Policies such as these set a clear agenda towards a zero-emission future and will help all businesses invest with confidence in zero emission vehicles in order that the market develops in the right way.”

The EU plan came as the UK Government published its long-awaited transport decarbonisation plan, which includes proposals to end the sale of new heavy vans and trucks powered by fossil fuels and electrifying the Government fleet.

New transport decarbonisation plan includes ending the sale of all new ICE vans and trucks by 2040 and electrifying the Government fleet.