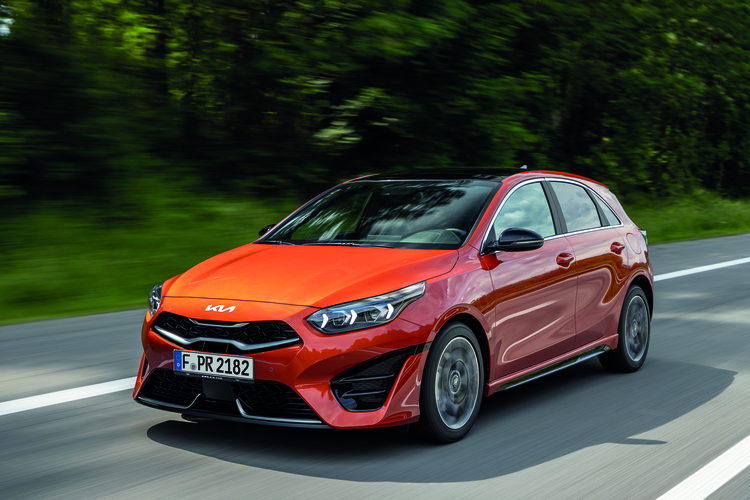 Kia has revealed the facelifted Ceed range, which has been restyled with a sharper look and a refreshed engine line-up.

The new model will go on sale later this year, with updates applied to the hatchback, estate and Proceed shooting brake variant.

Visually, the car has a sportier look than before thanks to its re-designed bumpers and new LED light units.

Kia’s new logo takes a prominent place on the front and rear of the new Ceed, while distinctive element such as the ‘tiger nose’ grille are retained.

A new line-up of six alloy wheel designs, ranging from 16 to 18 inches are also introduced as part of the facelift.

Two new colours are added to the line-up to replace the current Copper Stone option: Orange Fusion and Machined Bronze.

On the inside, seating is available in nine upholstery finishes - four of which are new with this upgrade.

A 12.3-inch digital instrument cluster is available on some models, paired with a 10.25-inch infotainment screen. Kia says every aspect of the interior overhaul has been designed with usability in mind.

Safety features have been improved, such as the previous blind-spot warning, which is replaced by an active avoidance technology. When operating the turning signal to change lanes, if there is a risk of collision with a rear side vehicle, the new Blind-spot Collision-Avoidance Assist will provide a warning. After the warning, if the risk of collision increases, the system actively controls the vehicle to help avoid a collision.

Driver Attention Warning has been updated to include leading vehicle departure alert tech, which provides a visual alert on the screen to inform the driver that the vehicle in front is driving away, such as at traffic lights or in slow-moving traffic.

The engine line-up for the new Ceed includes 1.0- and 1.5-litre petrol and the 1.6-litre diesel, all benefitting from Kia’s Smartstream technology. Power outputs range from 99-201PS.

Pricing and specifications for the new Ceed will be published shortly, ahead of the car’s official launch.

Kia is making a significant shift towards electric vehicles (EVs) with a new electrification strategy that includes the launch of an all-new model in Europe next year.

Kia has confirmed pricing for the new EV6, its first dedicated electric model that will arrive in October.

Kia has unveiled the new Sportage SUV ahead of its official launch in the autumn.