Figures from the Society of Motor Manufacturers and Traders revealed that 68,033 cars were registered in August 2021, as the automotive sector continues to be constrained by the global semi-conductor shortage and issues caused by the Coronavirus pandemic.

While August is traditionally one of the quietest months of the year for new car registrations, ahead of the important plate-change in September, last month’s registrations were down 7.6% on a 10-year average. 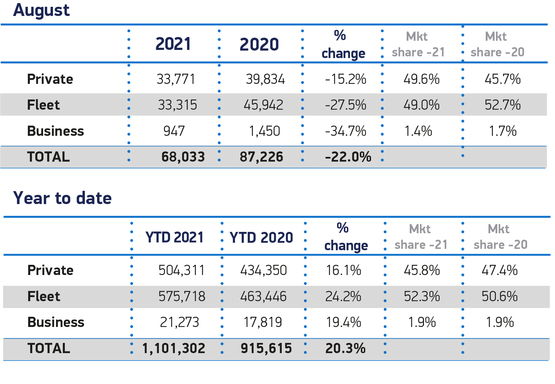 Registrations by business and fleet buyers fell by double digits in the month with fleet purchases down 27.5%, a loss of 12,627 units. Private activity held up better, registrations dropping 15.2% to 33,771 units, meaning that just shy of half (49.6%) of all sales in August were driven by private consumers.

Mike Hawes, SMMT Chief Executive, said: “The global shortage of semiconductors has affected UK, and indeed global, car production volumes so new car registrations will inevitably be undermined. Government can help by continuing the supportive Covid measures in place currently, especially the furlough scheme which has proven invaluable to so many businesses.”

Jamie Hamilton, automotive director and head of electric vehicles at Deloitte, added: “As the semi-conductor shortage continues, even as far as Q2 2022, new car sales will be impacted. All eyes will be on September, with plate change months traditionally leading to some of the biggest months for new car sales. Whilst there will be consumer interest in the new 71-plate, some in the industry are tempering their expectations. Dealer pre-registrations are significant contributors to September’s figure but the motive to pre-reg may be lower-than-normal, as some manufacturers have softened dealer targets and are currently only building to order, anyway."

Demand for the latest battery electric (BEV), hybrid (HEV) and plug-in hybrid (PHEV) vehicles, however, surged, up 32.2%, 45.7% and 72.1% respectively. In fact, demand for PHEVs has outpaced BEVs in five of the last six months since changes to the Plug-in Car Grant, affecting BEVs, were introduced in March. There are now some 130 plug-in models on the market.

Meryem Brassington, electrification propositions lead at Lex Autolease said: “The growth in electric and hybrid vehicles is encouraging as ever. The journey to move towards net zero is set to be strengthened even more with the closing of a Government consultation later this month to set the bar on how environmentally friendly a hybrid vehicle has to be to remain on sale post-2030. These positive changes will be crucial to ensuring that even more of the vehicles on the UK’s roads post 2030 are genuinely sustainable and contributing towards the UK’s net zero ambitions.”

“The growth in electric and hybrid vehicles is encouraging as ever. The journey to move towards net zero is set to be strengthened even more with the closing of a Government consultation later this month to set the bar on how environmentally friendly a hybrid vehicle has to be to remain on sale post-2030. These positive changes will be crucial to ensuring that even more of the vehicles on the UK’s roads post 2030 are genuinely sustainable and contributing towards the UK’s net zero ambitions.” 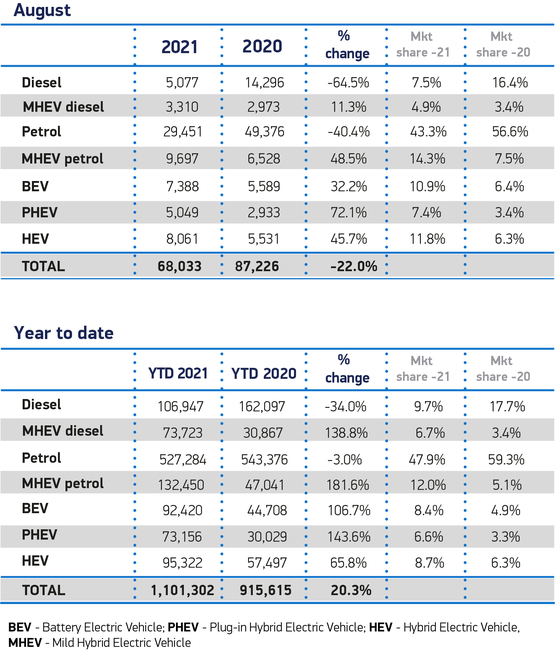 The mini segment was the only car bodystyle to see growth, up 30.7%, but with just 902 registrations it is a segment prone to greater fluctuations.

So far this year, UK new car registrations remain up 20.3%, to 1,101,302 registrations, an increase of 185,687 units with BEVs and PHEVs at 8.4% and 6.6% market share respectively. However, this performance is measured against the Covid-hit 2020 market, when showrooms were closed for much of the year.

Total registrations in 2021 are 25.3% below the 10-year average for the period January – August, according to the SMMT.

Lucy Simpson, head of EV enablement at Centrica Business Solutions, added: “Despite the downturn in overall registrations, it’s encouraging to see EV adoption continue to go from strength the strength, with battery and plug-in hybrid vehicles accounting for 30% of the new car market.

“With the 2030 phase-out date for the sale of new petrol and diesel vehicles now firmly set in stone, encouraging EV uptake needs to remain our top priority. The government’s recent Transport Decarbonisation Plan and other commitments have put down a strong marker for the UK’s electrification journey, however we must ensure that EVs remain accessible for all. This includes speeding up the roll-out of on-street charging to avoid large swathes of the population being left behind on the road towards an electric future.” 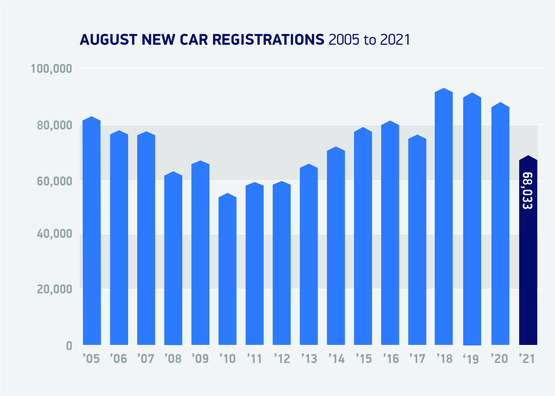