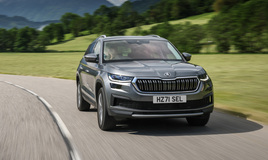 Skoda has introduced new trim grades for its Kodiaq and Kamiq SUVs, which boost the standard specification.

The Kodiaq range gets a new SE Drive trim, to replace the previous entry-level SE grade. It comes with 18-inch alloy wheels, electric folding door mirrors and sat nav via an eight-inch touchscreen.

SE Drive also comes with a one-year subscription to Skoda Infotainment Online, as well as front parking sensors and a rear-view camera.

The new trim grade is available with two engine options; a 1.5 TSI petrol and a 2.0 TDI. Both develop 150PS and can be specified with a seven-speed DSG. The 2.0 TDI is also available with four-wheel drive. Prices start from £30,415 OTR.

At the upper-end of the range, Skoda has replaced the Kodiaq SE L with a new SE L Executive trim. This adds 19-inch wheels, leather upholstery and an electrically adjustable driver’s seat with memory function.

All Kodiaq SE L Executive models are fitted with seven seats as standard, and come with three engine options; 1.5 TSI and 2.0 TSI petrol units with outputs of 150PS and 190PS respectively, and a 2.0 TDI diesel that generates either 150PS or 200PS. Four-wheel drive is an option on the 2.0 TSI and 2.0 TDI engines. Prices for the Kodiaq SE L Executive start from £34,275 OTR. 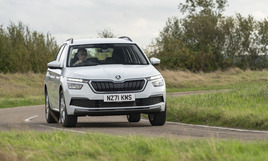 Drivers can specify the new SE L Executive trim grade with one of two engine options; a 1.0 TSI three-cylinder unit that develops 110PS or a four-cylinder 1.5 TSI unit with 150PS. Both can be specified with a seven-speed DSG automatic. Prices for the Kamiq SE L Executive start at £24,465 OTR.