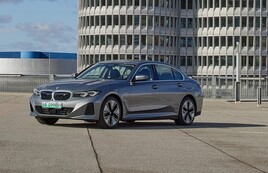 BMW has confirmed its ‘Neue Klasse’ platform will underpin a new 3 Series-sized electric car, due to launch in 2025.

The new architecture is being developed to support purely electric powertrains and will initially be focused on models in the compact executive segment, according to BMW CEO Oliver Zipse.

Zipse said: "When it hits the market, it will be concentrated on the 3-Series segment and at that point, in time the market will have developed into a size where it is reasonable to have only one drivetrain in that architecture.”

BMW recently unveiled its flagship i7 electric saloon, which is likely to arrive in the UK next year. It will be followed by the i5, an electric version of the current 5 Series.

The current iX3 electric SUV will be joined by a smaller iX1 model, too.

BMW is aiming to achieve cumulative sales of 2m electric cars by 2025 and has a target of half its global sales being electric-only by 2030.