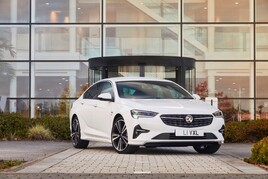 Vauxhall has removed the Insignia from its UK line-up as it moves towards a new electrified range of cars.

The model’s demise is the result of a rapidly declining D-segment, which has already said goodbye to the Ford Mondeo and saloon versions of the VW Passat.

Production of the Insignia, for the UK market, will end in the autumn, once existing orders have been fulfilled.

A statement issued by Vauxhall said: “In line with UK market trends, and a focus on our move to electrification, Vauxhall has decided to close customer ordering for the Vauxhall Insignia model with immediate effect.

“Ordering and production of its sister model, the Opel Insignia, continues unaffected in markets outside the UK.

“New electrified models will enter the Vauxhall line-up in due course as we move to our commitment to be a solely electric brand from 2028.”

The Insignia was first launched in 2008, replacing the Vectra. It was a key fleet model, attracting strong sales. The second generation Insignia arrived in 2018 and was facelifted in 2020.

Ford has announced that it will stop producing the iconic Mondeo at the end of March next year.

Fleet and business registrations fall by a third

The chip shortage is being blamed for a 32% fall in company car registrations in April, compared to the same month last year.