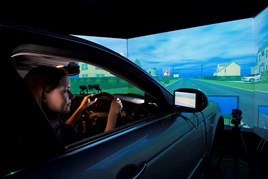 Nearly a quarter (23%) of young drivers have had an accident or near miss in the last 12 months due to being distracted behind the wheel, a new study has revealed today.

The research, undertaken by Goodyear Tyres as part of their Young Driver programme, spoke to 1,000 drivers aged 17-25 to find out more about young driver behaviour.

The study found that nearly one in five young drivers (18%) had driven through a red light due to being distracted, with men more likely to do so than women (23% to 17%).

Mobile phone usage is also still prominent in young drivers, despite laws prohibiting their use. Forty-two per cent of young drivers said they have used their mobile phone illegally whilst driving in the past year.

Of those, 29% admitted to calling or answering the phone, 28% said they have text a friend whilst behind the wheel, whilst one in ten admit to logging into social networks (the majority being male drivers at 58%). 45% of the latter have searched newsfeeds or updated their status on Facebook, whilst 32% have used Snapchat to interact with friends.

23% of young drivers said the risk of being prosecuted did not affect their mobile phone use.

The study went on to find that the increase of music download sites has also played a part in increasing rates of distraction for young drivers. Over one quarter (27%) admit to using sites like Spotify or Deezer whilst driving - nearly half (49%) of these users are aged 17-19.

Personal grooming is also distracting young drivers. Over one in ten (13%) young drivers also admitted to regularly applying make-up or skin products behind the wheel, whilst 11% have styled or brushed their hair.

“The worrying statistic is that over a quarter (28 per cent) of those young drivers who had a near miss or accident didn’t tell their parents about the incident. This increases to one in three of drivers aged 17-19 years old who keep the collision a secret.” said Kate Rock, Goodyear Tyres.

“A major study by TRL in 2008 reported that one in five young drivers are likely to have an accident in the first six months of driving, so it’s imperative that more education is provided to make young drivers aware of the dangers of distractions, so that safe driving becomes second nature.”

As a result of the findings, Goodyear has launched a VR app in partnership with the Driving Instructors Association (DIA), with the aim of tackling young driver distractions.

Players will aim to drive as far as they can in a safe manner whilst they are increasingly exposed to challenging distractions and obstacles.

Carly Brookfield, CEO of The Driving Instructors Association, said: “Teaching new drivers how important it is to keep concentration whilst behind the wheel is one of the most important things our instructors do. It’s crucial this issue remains a talking point when it comes to improving road safety for young drivers.”