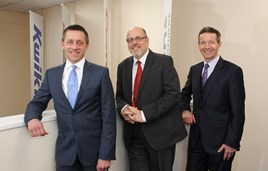 Lambert has been Kwik Fit fleet director for almost seven years and his retirement sees the recruitment of Andy Fern as fleet sales director and the promotion of Simon Lucas to the newly created position of customer support director.

Fern, who joined Kwik Fit on February 1 following an 18-year career with Michelin, will assume his new role with overall responsibility for fleet sales on April 1. He has a wealth of fleet industry knowledge latterly as Michelin’s national fleet sales manager.

Lucas said: “A number of new fleet initiatives have been launched in the last two years, including most recently Fleet Web Bookings, and Tannochside has been central to supporting those developments.

“Kwik Fit has a number of exciting new customer-focused initiatives planned for launch over the coming months and years and their development will result in an expansion and enhancement of the range of services offered through Kwik Fit’s Customer Support Centre.”

Kwik Fit has doubled the fleet warranty on friction brake parts such as pads, discs and drums.