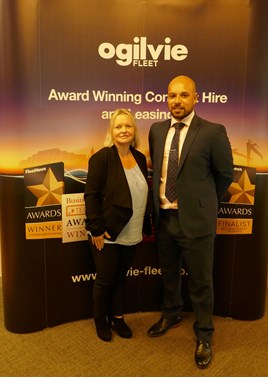 Ogilvie Fleet has boosted its south England sales team with a double appointment.

The company has grown its leasing fleet of vehicles to more than 15,000 units, which has led to the appointment of Sarah Craig and Lance Spencer.

Craig brings 15 years’ experience in the contract hire industry, holding front line sales positions with both LeasePlan and ALD Automotive. She joins Ogilvie Fleet from Daimler Fleet Management, where she held a new business and account management role for the Southern region.

Spencer, a former apprentice footballer at Bristol Rovers, has joined Ogilvie Fleet from the Toomey Leasing Group where he grew Southern region business over the past two years.

The pair will be led by director of sales Jo Clark and supported by sales managers Mike Wynn and Jamie Arkell.

Clark said: “The continuing increase in our customer base coupled with significant new business signings has resulted in even greater demand from businesses to talk to Ogilvie Fleet about the range of solutions available resulting in the further expansion of our sales team.”

“We have immense capacity from our IT and technical capability to support fleet growth and now we have further expanded our sales team to deliver on our expansion ambitions.”

Attention to detail has helped Ogilvie Fleet win a four-year full outsourcing contract to provide vehicles and a range of services to Raymond Brown Construction.

Fleet decision-makers have voted Ogilvie the UK’s top vehicle leasing and fleet management company for service to customers in the 2017 Experteye awards.