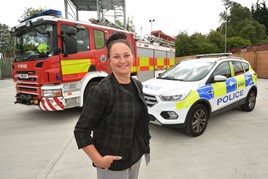 Her appointment as head of joint vehicle fleet management has allowed the two organisations to expand their collaboration programme, which was launched in early 2017 to maximise efficiency and effectiveness.

As part of her new role, Gilding will lead and develop a cost-effective, efficient and resilient fleet management service for both South Yorkshire Police and South Yorkshire Fire and Rescue.

She will also provide strategic oversight and management of all aspect of both organisations’ fleet services to help progress the objectives of both services.

Gilding said: “I am delighted to have been appointed as the head of the joint vehicle fleet management department for both South Yorkshire Fire and Rescue and South Yorkshire Police.

“Both organisations’ fleet departments provide an invaluable support service to ensure our key resources are available to meet demand and I am proud to have been chosen to lead such a service.”

Gilding had previously worked for South Yorkshire Police for 25 years, and was most recently its head of fleet management.

During her time in that role, South Yorkshire Police was named Fleet News’ Fleet of the Year in 2015.

Prior to Gilding’s appointment, both organisations were operating separate fleet departments with similar administrative and management roles, which were identified to be best managed through a joint centralised team.

The programme has already led to the creation of a joint police and fire station in Maltby, Rotherham, the development of a joint community safety department and the appointment of a head of joint estates and facilities management.