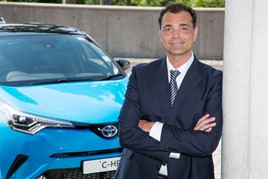 Chris Hayes has been appointed as director of vehicle planning and logistics at Toyota (GB). He returns from Toyota Motor Europe where for the past three years he has had responsibility for European pricing strategy and operations.

Hayes joined Toyota (GB) in 2003, holding various field-based roles before an overseas assignment as marketing manager with Toyota Motor Sales US based in California.

Returning to Toyota (GB) in 2009, Hayes then led both the sales planning and vehicle marketing teams before promotion to marketing director in 2013.

Since June 2015, he has been on assignment to Toyota Motor Europe based in Brussels.

He said: “I am really looking forward to working with the fantastic team here at TGB again. The UK already represents the largest volume Toyota and Lexus market in Western Europe and provides unique challenges and opportunities.

“With the launch of key new generation models in 2019 (Auris, RAV4 and UX) we are looking forward to growing our brands and accelerating our sales of petrol hybrid electric technologies.”

In his spare time, Hayes enjoys cricket, golf, travelling and spending time with his family.

Fleet Poll
Should a ban on the sale of diesel and petrol new cars and vans be implemented at the same time?
Vote
View all
84