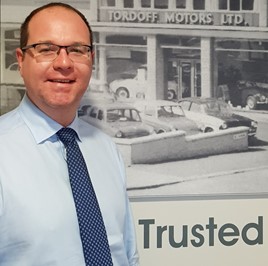 Ben Creswick has replaced Paul Walters as the new managing director of JCT600 Vehicle Leasing Solutions (VLS), moving into the top job a year after joining the business.

He was appointed commercial director at JCT600 VLS last summer, bringing with him a wealth of knowledge from the fleet and leasing sector having previously worked at Zenith and FMG.

Former MD Paul Walters has left the business to pursue other interests.

Creswick told Fleet News that he was “incredibly proud” to be named MD. “There is an incredible group of people at VLS and within the wider JCT600 Group, who are passionate and committed to delivering the highest quality of service,” he said.

“Having worked within different ownership structures, this is my first time within a family owned business and it is clear that everyone really lives and breathes the values which have made this business what it is today.”

Fleet News first recognised Creswick’s potential in 2011, while at Zenith, when he was awarded the FN50 rising star award. The citation at the time said: “Our winner has made it to a director’s position at the tender age of 29 and is someone we expect to see continue rising through the leasing ranks in the coming years.”

His then manager described his “selfless commitment, drive and passion for the business”, which had resulted in some of the company’s largest ever contract wins.

Creswick was also recognised in Leasing Life’s ‘30 under 40’, which profiled 30 of the brightest stars among the European leasing industries future leaders. He was described as “one of the youngest entrants in this list” and it highlighted how, having been with Zenith since November 2002, he had worked his way up the ranks to his then role on the board of directors.

John Tordoff, chief executive of JCT600, said: “Since joining VLS Ben has re-structured the business to ensure that we are fit for the future and he is already working on several new technological developments whilst remaining focussed on customer service levels and sales performance overall.”

JCT600 VLS are also celebrating their 30th year of business and marked the occasion with an employee black tie dinner at The Grand hotel in York to say a big thank you to their colleagues.

Customers are also due to receive a handwritten and personalised letter from their account management team, which thanks them for partnering with the leasing company. This will accompany a 30th anniversary magazine, which covers many of the leasing market’s major talking points.

Creswick concluded: “This is an exciting time for VLS and I am lucky to have the people, technology and service portfolio to ensure we will continue to operate as one of the leaders in the UK leasing industry.

“One of my first priorities is to get around the country and engage with all our customers, which I hope to complete over the coming months.”

JCT600 VLS – established in 1988 – is an independent and family owned provider of vehicle funding and management solutions. It operates a fleet of 6,500 vehicles supplying all brands of cars and vans throughout the UK from their head office Tordoff House in Apperley Bridge.

Kingspan Insulated Panels has awarded the supply and management of its 73 company cars to JCT600 Vehicle Leasing Solutions.