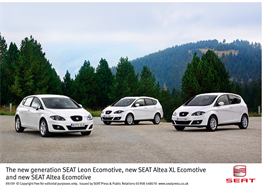 Huge strides have been taken by SEAT in reducing CO2 emissions since it introduced its first Ecomotive models in 2008.

At the time, the Ibiza Ecomotive with emissions of 99g/km and the Leon Ecomotive with 119g/km were among the most frugal and lowest-emitting models in their classes.

Both models used clever techniques and equipment that help save fuel and reduce CO2, but now this technology is spreading across the SEAT range.

Their equivalent models today achieve 92g/km and 99g/km respectively, demonstrating that SEAT competes with the very best in the industry when it comes to diesel technology.

The Ibiza Ecomotive uses a 1.2 TDI engine and has CO2 emissions of 92g/km – a figure that applies to five-door hatchback, three-door SC and ST estate versions.

The Leon Ecomotive achieves 99g/km to put it on a par with the best-performing diesels in its class, while Ecomotive versions of the versatile Altea and Altea XL both sneak under the 120g/km barrier at 119g/km.

SEAT’s head of fleet and business sales Nick Andrews admits that Ecomotive might not be as well known as the green technology used by other manufacturers such as BMW’s EfficientDynamics and Volkswagen’s Bluemotion, but believes there will be opportunities for SEAT’s greener vehicles to increase their profile and take advantage of shifts in the market.

“Ecomotive was a key factor in our deal to supply 500 Leon Ecomotive models to British Gas this year,” he said.

Vehicles with CO2 emissions up to 100g/km will become more significant for fleet users over the next few years.

From January, the London Congestion Charge changes its discount rules which currently apply to all ‘alternative fuel’ vehicles, to apply to vehicles with CO2 emissions lower than 100g/km.

Ecomotive models achieve their exceptional low-CO2 performance (which also results in ultra-low fuel consumption) through a variety of modifications from standard versions as well as additional technology.

But increased adoption of the technology and a greater acceptance of these features have prompted SEAT to revise its ‘green’ badging strategy.

A key part of Ecomotive has been automatic stop-and-start technology which, when the engine 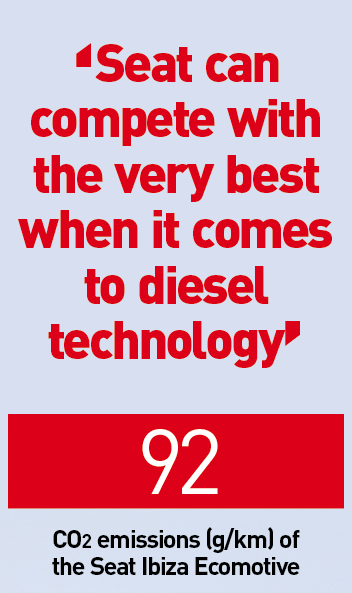 has warmed up, can switch off saving fuel and stopping emissions. The engine restarts again automatically the moment the driver is ready to move off.

Ecomotive uses energy recovery under braking which helps the vehicles operate more efficiently. The Ecomotive badge will now be applied to any car in the SEAT range that uses these features.

However, we will soon see a new E-Ecomotive badge for vehicles that include extended fuel-saving and CO2 reducing features, such as improved aerodynamics and low rolling resistance tyres.

The addition of the new ‘E’, which appears in green above the chrome Ecomotive boot lid badge, makes these the standard-bearers of SEAT’s green performance identifiable at a glance.

These real world examples of SEAT’s commitment to fuel efficiency and emissions reduction appear alongside the brand’s concepts for future engineering and styling developments such as the petrol/electric hybrid Leon Twin Drive Ecomotive and latest plug-in electric IBE concept.