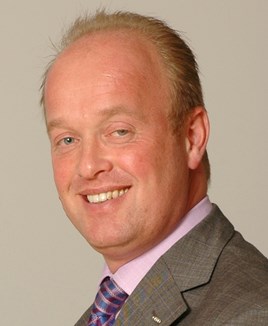 Jeremy Hicks reflects on the JLR channel swim, JLR Bike and JLR Run, which collectively raised over £185,000 for Ben as part of the Industry Leader Challenge.

Hicks explains how a personal challenge turned into something bigger for JLR UK with "clear business benefits".

When I decided to take on the channel swim I found the main challenge was recognising how much training I had to do and wondering how I would fit it into my life.

I’d never thought about it until I started training. However, I came to realise that “I don’t have time” is never an excuse!

You can always find the time and when you feel like you can’t go, that’s actually the best time to go. Make it part of your day.

I sometimes trained at odd times and in odd places – for example when my team and I were away on business trips we found ourselves in a swimming pool, in the middle of Wigan at 7am.

There’s nothing like a goal
I believe you need a goal – it makes you do something! There were times after work when I could have easily driven past David Lloyd and gone straight home, but I knew I had to do it if I was going to get myself to the level of fitness required to succeed in this challenge.

It’s amazing how, after exercise, the endorphins kick in. My simple rules were to always to carry my kit with me and keep track of what I had done so I bought myself a Garmin swim watch to track my activity religiously – that spurred me on too.

I found myself continually checking the app to see to see how my distances were increasing – month by month. My peak was 10km in a week.

Our first big milestone was the qualification swim, which consisted of two hours of continual swimming, so we focused on working towards that.

It was a daunting task for all of us. After that, I committed to swimming at least 1500m three times a week. The good news is, even though the challenge has been completed, I’m keeping up the training.

But it’s not just my physical health that has improved; my ability to deal with things is also better.

I don’t worry about things in the same way; things don’t get to me as much. Swimming has definitely helped with my personal wellbeing and confidence.

I’ve really noticed that I’m much better equipped mentally and I’m much more effective in all aspects of my life, including work, because of swimming.

It’s become a big part of my life now – I don’t want to stop!

Social benefits for the business
When I first became aware about the potential social benefits of the challenge, it was actually the result of something negative.

When we decided to swim the Channel, it became a big topic of conversation for those in the team.

Then someone said to me, “you’ve created an exclusive club, Jeremy, others are feeling left out.” This was obviously not what I wanted to happen, so I encouraged and challenged the wider team to get involved.

This was how the JLR Run and JLR Bike challenges were born!

This created a unified sense of purpose across JLR UK – we were all working together behind a fantastic cause with a clear goal – to not only raise funds, but to also raise awareness about Ben.

The social element of this challenge has been absolutely fantastic – in fact, some JLR colleagues still go running and cycling together regularly! Likewise, if there’s ever a chance for the swim team to swim together, we do.

We all understand that physical wellbeing is important, but mental health is still slightly taboo and an unspoken topic.

By being part of this challenge, I’ve seen how different aspects of health and wellbeing fit together – physical, mental and social – and how important they are, not just individually, but also collectively.

They are inextricably linked.

Future challenges
The cyclists have put together a proposal for next year and they want to cycle to every JLR location in one day – which is 150 miles!

I’ve also been thinking about the next swim challenge and we are definitely going to do something else next year.

There’s talk of swimming Lake Windermere and potentially the Thames Marathon. I’ve also just bought a bike so that’s another challenge on my list!

There’s definitely still a buzz across the business as other colleagues have been asking me what we can do next year!

The purpose of this challenge was to not only raise funds but also awareness about how Ben can help individuals with all aspects of their health and wellbeing – and I believe we’ve done that.

The health benefits are definitely good for business too. What’s not to like?

The not-for-profit organisation launched a new package Ben4Business in hopes to “drive value to industry companies”.