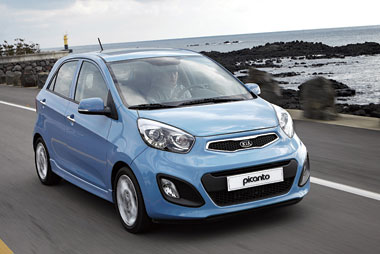 A new small car is on course to make a big impact on plans to grow Kia’s business in the UK over the next two years.

Stretched to provide greater room for occupants and their luggage, the second-generation Picanto range is set to generate more than 20,000 registrations in its first full year on sale.

Officials at the Korean company expect to register around 12,000 this year after the five-door city car’s UK market release in June – 4,000 units less than total sales of the model in 2010.

And they are confident that extending the minicar line-up to include sportier-looking three-door versions in autumn will add a further 8,000 units to annual volume.

“Spiralling fuel prices are fuelling an upsurge in interest in economy transport and we think the new Picanto is being launched at just the right time,” said a Kia Corporation spokesman as Fleet News put early examples of the model through their paces in Korea.

Prices and specifications are still to be confirmed, but it is understood that five-door versions will cost from £7,995 to be around £600 dearer than the current entry-level car, but will offer more comfort and convenience features.

UK trim levels are expected to follow the 1,2 and 3 grade system and standard equipment is likely to include six airbags, air conditioning, power front windows and Bluetooth technology with voice recognition and MP3 compatibility.

Impressively spacious for its size, the easy-handling Picanto proves to be a refined motorway cruiser.

Surprisingly nippy in 1.25-litre form, it is capable family transport.