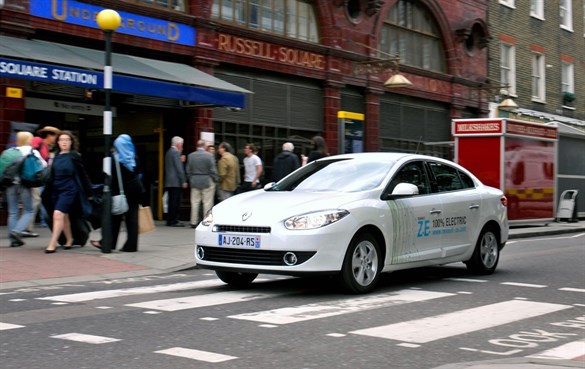 A total annual supply of 30,000 cars for all European markets means Renault’s new electric family saloon is likely to remain a scarcity on British roads for some time.

But company executives have every reason to believe their breakthrough Fluence zero tailpipe emissions model will still register a big impact with fleet and family motorists when it goes into the showrooms next year.

Though the car is certified as having the power to cover 115 miles on a full charge, its battery lasted for more than 134 miles on the way to winning a recent rally for electric, hybrid, hydrogen and fuel cell vehicles in Germany.

The extra distance represented an improvement in range of eight per cent and showed driving style can be as significant for boosting economy in electric cars as it is in those powered by traditional fuels.

“Most fleet users know what level of autonomy they need and people who drive the Fluence for less than 100 miles a day will never need to change their batteries at the centres we are aiming to provide in the longer term for users who have to travel greater distances.

“Our tests have confirmed that electric power is more cost effective than the internal combustion engine after 6,250 miles, so we expect this car to attract a lot of interest,” Renault spokesman Christophe Deville told Fleet News.

An adaptation of a Turkish-built model, the five-seat saloon remains eerily quiet after the ignition key is turned and a dashboard light indicates it is ready to roll.

The absence of the usual clutch and gearbox means acceleration is instant and drive is delivered to the front wheels directly, smoothly and in seamless fashion as the powerful motor whirs up to 12,000rpm.

And as maximum torque remains on tap throughout the rev range, instant acceleration allows swift and safe overtaking manoeuvres and overall performance feels surprisingly sporty for such a spacious car.

UK pricing for the Fluence will be revealed in the next few weeks and is expected to be around £18,500 – the car’s cost in France - as a result of the Government subsidy.

That figure is substantially lower than prices of rival electric cars because it excludes the cost of the battery, which Renault is renting to its domestic customers for €79 a month on a three-year contract that limits the distance driven each year to 6,000 miles. Company officials say other contracts will be available nearer the car’s launch in early summer.

“Renting the battery means our customers will never have any concerns about how long it will last and how much a replacement will cost,” said Deville.

Verdict
Good performance over a useful range should make the Fluence Z.E. an attractive proposition, particularly for fleets operating in urban areas.